Global News
Last updated Aug 6, 2016
Officers of the Nigerian Police have arrested suspected child traffickers in Bayelsa state who were seen with 12 children in their custody.
Related Posts

See The 3 Men Who Sexually Assaulted Nine Horses, A Cow,…

See The Gold Customized Mercedes Benz That Is Causing A Buzz… 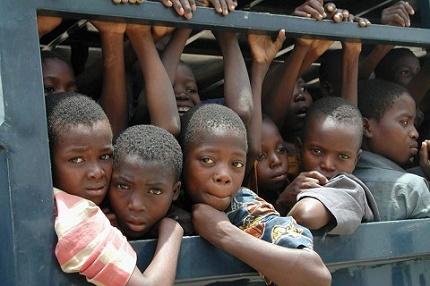 The two vehicles – a Mazda 626 with number plate BC 645 KSF and a Jetta with number plate DX 643 PH travelled from Akwa Ibom to Bayelsa. The children were nine females and three males, aged between five and 17 years.

The vehicles were paraded at the State Criminal Investigation and Intelligence Department, Yenagoa.

The Police Public Relations Officer, Mr. Asinim Butswat, said they were arrested on Sunday during a routine stop-and-search operation along the Glory Land Drive.

“When they were interrogated, they could not tell where they were going. They said their parents are here in Bayelsa, but till now, none of their relatives have come to claim them.”

The police spokesman gave the identities of the prime suspects and drivers of the two cars as Inemesi Koffi and Geoffrey Ezekiel, both from Akwa Ibom State.

In an interview, Inemesi Koffi, claimed that the parents and guardians of the children asked him to help carry the children to Yenagoa to spend holidays with them.

Koffi, a taxi operator in Bayelsa, said he was in his village, Nkana, in Etinan Local Government Area of Akwa Ibom for a funeral when the children’s parents contacted him and sought his help. He claimed that some of the children’s parents were vegetable sellers at Swali Market and restaurant operators in Yenagoa.

Butswat said the children had been handed over to the Social Welfare Department of the State Ministry of Women Affairs while investigation was ongoing.

Lionel Messi Names His 5 Favourites To Win This…

Watch The Moment A Driver Tried To Escape Arrest From LASTMA…