A youth corps member was, on Wednesday, short in Warri, Delta State, by suspected armed robbers. The victim identified as Musa Kayode Noah, was allegedly shot near his waist, very close to his backbone, according to report. 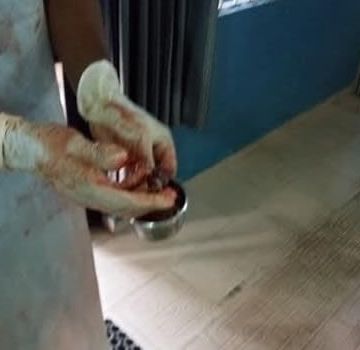 Read according to Tribune;

The corps member, with unconfirmed number 15B3550, is said to be from Ayangba in Kogi State, but lives in Lagos with his parents.

Described as gentle and honest, Kayode was said to have come to Warri from a rural community in Ethiope East Local Government Area of the state that has no bank to withdraw money from a third generation bank at Ugborikoko, along Airport road.

Read Olamide Reply to Wizkid Question After He Asked Him To…

Yahoo-Boy Who Eats Faeces to Scam Foreign Victims Caught and…

After the withdrawal, the robbery suspects waylaid and shot him before making away with an unspecified amount withdrawn from the bank.

The victim, said to be in mufty during the incident, was rushed to Syracuse Clinic in Warri, where the bullets were extracted from his B.uttocks.

Medical Director of the clinic, Dr Victor Oraegu, who spoke with Tribune Online, said the young man was rushed to his clinic having lost much blood.

The United States-trained surgeon said the bullet pierced through the B.uttock but, perhaps, by providence, it did not hit the backbone.

Describing his condition as stable, Dr Oraegu said being a young man, he had to swing into action to treat the victim even when no money had been deposited.

It was gathered, as of the time of filing this report that father of the victim was on his way from Lagos to ascertain his son’s condition.

Acting public relations officer, Nigerian Police, Delta State Police Command identified as Andrew, speaking on phone said the report of the incident was yet to reach the command.

See What Arsenal Doctors Did To Alexis Sanchez at Home