Shocking! See How Angry Mob Threw Stones and Eggs to the President During Public Function (Video)

On Apr 13, 2017 0
A President was pelted with eggs and stones while he presided over a parade in a northeastern province of Venezuela, as footage of the impromptu bombardment captured on cell phones go viral.
Related Posts 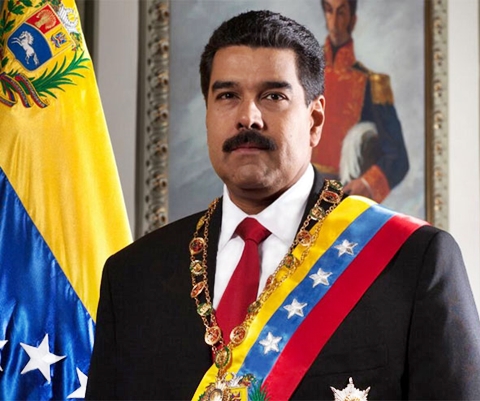 Venezuela President, Nicolas Maduro disappointed with the mob attack
Venezuelan President Nicolas Maduro’s convoy was pelted with objects by members of a crowd at a military parade, reports published on Wednesday revealed.
The incident occurred at San Felix, a town in the southern Bolivar region, during a military parade held upon Maduro’s return from a trip to Cuba.
A live television broadcast of the event showed the president in an open vehicle, surrounded by a security detail, as the crowd began throwing objects at him.
However, the broadcast cut away shortly thereafter.
Press reports identified the objects thrown by members of the crowd as eggs and stones, adding that five people were arrested as a result.
Opposition deputies calling for Maduro’s ouster seized the opportunity to ridicule the socialist leader on social media.

Source on ground sent this video of what appear to be people in #Venezuela throwing eggs at President Maduro during military parade #11abr pic.twitter.com/kz02ERiKGR

“Nicolas, the people of San Felix love you and want to feed you: that’s why they threw eggs, tomatoes, vegetables, banana peels and other things,’’ opposition leader Henry Ramos Allup said on Twitter.
National Assembly president and opposition deputy Julio Borges called for elections, saying that the people of San Felix and all Venezuelans “reject Maduro and repudiate his dictatorship.”
The official newspaper Correo del Orinoco, however, published a photograph of Maduro greeting the public during the parade with the caption: “President Maduro thanks the people of Bolivar for receiving him with such passion and love.”
The incident occurred amid escalating protests against the government, following an attempt by the Supreme Court to strip the opposition-controlled National Assembly of its powers.
-NAN