On May 12, 2017 0
The Governor of Abia State, Okezie Ikpeazu has won Uche Ogah at the Supreme Court, as the court on Friday, affirmed the election victory of the governor by a five-man panel led by the Chief Justice of Nigeria.
Related Posts 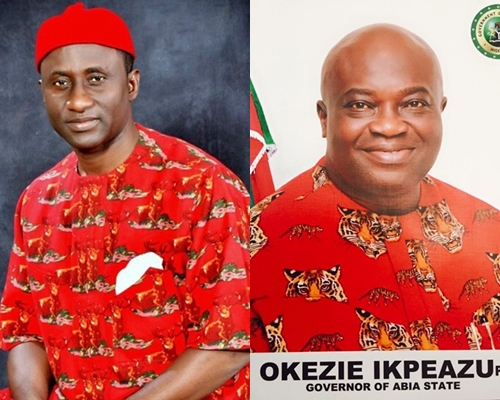 Uche Ogah & Ikpeazu
The Supreme Court on Friday affirmed the election of  Governor Okezie Ikpeazu of Abia State after dismissing the case of Uchechukwu Ogah, who had earlier obtained a judgment of the Federal High Court in Abuja to replace Ikpeazu, The Punch exclusively reports.
A five-man panel led by the Chief Justice of Nigeria, Justice Walter Onnoghen, dismissed Ogah’s appeal for lacking in substance.
Justice Okon Abang, then of the Federal High Court, Abuja, had in his judgments delivered on June 27, sacked Ikpeazu and directed the Chief Judge of Abia State to swear in Uchechukwu Ogah as the state governor.
The judge ruled that with the alleged falsehood and discrepancies in Ikpeazu’s tax documents attached to Form CF001 which he submitted to INEC nominating him as the Peoples Democratic Party’s governorship candidate, he (Ikpeazu) was not qualified to have contested the 2015 election in the state.
But in its judgment delivered on August 18, 2016 a five-man panel of the appeal court led by Justice Helen Ogunwumiju, nullified Justice Abang’s judgment and set aside all the orders, including the one directing INEC to issue a fresh certificate of return to Ogah.
The Supreme Court, in its lead judgment prepared by Justice Dattijo Mohammed but read by Justice Ejembi Eko, affirmed the substantial decision of the Court of Appeal on Friday.
The court held that it was detrimental to Ogah’s case that the Peoples Democratic Party’s guideline around which the suit of the plaintiff was built was not presented before the court.
It also held that Ikpeazu as then a civil servant could hardly be found to have flouted tax payments when his tax deductions were at the source.
The apex court, however, disagreed with the appeal court on one issue, holding that contrary to the lower court’s decision, the suit filed before the Federal High Court in Abuja was rightly commenced by an originating summons.
In his post-judgment comment, the CJN noted that there was a “security breach” in the course of preparing the judgment.
Warning politicians to allow the judiciary to do its job without interference, he said there were attempts by them to use court officials to get to know Justices of the Supreme Court that would prepare the lead judgment and what the court’s decision would be.
The CJN said the incident would be investigated and those culpable would be sanctioned.