By ONPOINT On May 13, 2017 0
An elderly woman whose grandson is suspected to be in the hands of some outlaws is ready to break the bank for his safe release.
Related Posts

Twitter User Serached For A Husband For Her Sister, Lists… 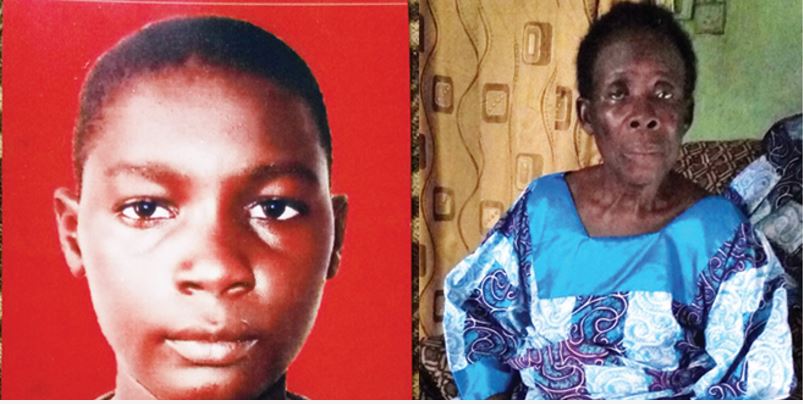 Imole Oke and Racheal
15-year-old Imole Oke, an only child, was two years old when he lost his father to diabetes, and was put in care of his distraught grandmother, Racheal, 84.
For Racheal, after a period of unhappiness and gloom, it was refreshing to see her late son in Oke, her grandson. Holding and caring for him had lightened the gloom, until about three weeks ago, when that changed.
On Monday, April 24, 2017, Oke was sent to buy petrol at a fuel station close to the Okes’ residence in Mile 12 area of Lagos but has not come home till date.
Truly, Racheal has lived the agony of losing someone she cherished with all of her heart, but doubts that she can survive any more loss.
Since the incident, family members have been worried about Racheal’s health and eating habit and assurances that they were doing all they could to find Oke have not helped.
“I cannot eat; I cannot bathe. How can I eat when my grandson is still missing?” Racheal asked.
Although Racheal retired many years ago as a trader and lives in a drab building in a rundown part of Lagos, she was desperate to have her grandson back, even if it means paying a huge ransom.
“When my son died, I consoled myself that he left a son behind- his only child. And now, we cannot find him and don’t know what happened to him. I see my late son in the boy, so I am devastated by the incident. His loss is a huge blow and my only prayer is that I see him alive again.
“If he was kidnapped and his abductors want ransom, I will give it to them. They should ask for anything they want, I will give it to them as long as they can return my grandson to me. I will pay any amount they want to collect,” she said with a note of desperation.
The fuel station Oke, a Junior Secondary School Two pupil of Ayedere Ajibola Secondary School, Ketu, went to, is just about 300 metres away from his grandmother’s house.
His mother, Ebunola, lives with her mother in Ikorodu and only visits her son at his paternal grandmother’s house in Mile 12 when she wants to see him.
She expressed sadness over the incident in a telephone conversation with Saturday PUNCH.
“He is a gentle boy and wouldn’t hurt a fly. We have looked everywhere for him but there has been no luck and nobody has contacted the family to demand for ransom. We are confused and don’t know where to go to again,” she said.
Oke’s case has been reported by the family at Ketu Divisional Police Headquarters, where the police promised to work with other stations to find him.
His uncle, Felix Oke, who said it has been hard for the family since his nephew was missing, however, added that they lacked the courage to search for Oke at nearby morgues and hospitals.
“The family lacks the courage to go to the hospital or the mortuary to look for him to see if there is any chance that he may be there. No, we are not going to do that. And I know that if he were to be in a hospital, he would have called our mobile telephone numbers because he knows them by heart,” he said.
According to Felix, the family has resorted to prayers as it had no idea of where else to go.
He said, “Apart from reporting the case to the police, we have announced it on a radio station. It was not the first time he had gone to buy fuel there so initially, when he did not return on time, they thought he had lost the money that was given to him and was afraid to come home.
“So they went to the station to ask for him but the attendants there said they attended to many boys of his age group and could not identify him. There was no account of any incident along the route to the fuel station, so we were perplexed.
“We went to our second family house in Ketu to see if he had gone there but there was no sign of him. So we started calling everyone we know to check if they saw him, but still, there was nothing. He left home around 7.15 am on that day. And that was not the first time that he was sent to buy fuel or anything.
A source at the Ketu Police Divisional Headquarters told a reporter that kidnapping was not common in the area, but that it was not being ruled out along with the fact that Oke could have run away from home to join a gang.

Nigerian Man Arrested at Malawi Airport for Attempting to Externalize $7,000

Mother In Tears As Her Daughter, 4, Narrates How She Was Raped By School Teacher…

These 7 Nollywood Actresses Said Goodbye To Acting For…

Revealed! Top 100 Most Valuable Footballers in the World and…