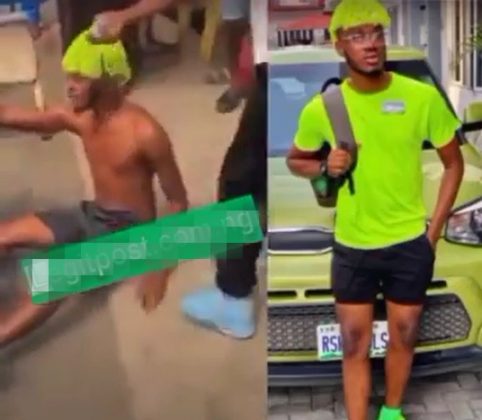 The moment a suspected yahoo boy was heard screaming that he can’t kill his mother for money has been captured on camera.

It was gathered that the young man ran the streets half-naked while yelling ‘I no fit kill my mama for money’, before he was held down by his friends who poured cold pure water on his head.

WAEC To Withhold The Result Of Candidates In 19 States

In the video, the suspected yahoo boy took off his clothes as he repeatedly laments “I no fit kill my mama for money ritual” which gave onlookers a guess that he is one of the many unlucky young men that towed the rough part in making quick money.

All efforts made to calm him down proved abortive as he ran off while people sympathized with him on his condition.

Toyin Lawani Shows Off Wig Worth N4m, Says Cardi B Inspired It (Video)

“Na Juju We Dey Use, No Be Grace” – Suspected Yahoo Boys Reveal Source of Wealth…

Couple In Trouble After Shooting P0rn Video In A Popular…